Happy 2019! Mystery of the Miracle Frisbee

Happy 2019! This is a true story that happened on New Year's Eve of 2011. I originally published it in January of 2012.  I've republished it the first of the New Year over the past several years because it's true, possibly inspirational, and I think you'll find it amazing.  On New Year's Eve of 2018/2019, I will again be at the spot where the miracle described below happened.  Will something amazing happen again?  Probably nothing so dramatic.  But if so, I will let you know!


The story below is absolutely true.  My family and I were there and experienced this first-hand.  It is not the type of material you find in my typical blog entry.  However, it is too good not to share.  Please post your thoughts at the bottom of this page.  Share this with anyone you think might enjoy it or get caught up in the mystery.

What do you call it when something beyond understanding occurs -- something that defies all odds? Is it a paranormal event?  A coincidence of unimaginable proportions?  Magic?  Or is it a miracle? And what if you can prove to yourself and others that it really happened because you were there and you took photographs!  This incident concerns nothing more elaborate than a Frisbee, but it is mystifying, nevertheless.

My wife’s family is from Guatemala.  My wife, our two children, and I live in Illinois and sometimes visit her family in Central America over the holidays.  This year, we, along with most of my wife’s large family, spent the week after Christmas at my sister-in-law’s beach house on the Pacific coast of Guatemala.


Every day, my wife’s younger brother, Gonzalo, would run out to the volcanic black sand with his Frisbee and toss it along the beach or over the waves and let the wind return it to him.  Two days before New Year’s, as my children and some of the cousins played on the beach, I took my camera and photographed him exercising with the white disc.
Later in the evening, my wife, Maria, and I; Gonzalo and his wife, Marta Yolanda; and the children went down to the beach to catch the sunset.  The children built a castle in the sand.  Maria, Marta Yolanda, and I stood and watched the progress of the castle building activities, while Gonzalo launched his Frisbee toward the waves.  I took several photographs.  Several times, the Frisbee landed on the water and was returned in the waves.  Everyone was having a great time, until my brother-in-law made a bad toss.  He groaned as the Frisbee went into the waves and was not immediately returned on the surf.

“Give it a minute, and maybe the waves will bring it back,” I suggested.

“No, Tom, I don’t think it’s coming back,” he sighed, as we all peered into the dark waves, hoping that he might be wrong.

After another half minute, I pointed into the surf as a white object came into view.
“There it is,” I yelled.  The Frisbee washed directly to my wife’s feet and hit her on the shins.  She walked over and handed it to her brother.

He took the disc happily, but after only a moment said, “This isn’t my Frisbee.”

We all looked at him.

“That has to be your Frisbee,” I said.

“Maybe it had a sticker on it that came off in the water,” my wife suggested.

“No,” Gonzalo insisted.  “Mine was a pure white.  This is pearl colored.”

“That has to be your Frisbee,” I said.   “If it’s not, whose is it?  And how is it possible that it washed up at our feet just as we were looking for a Frisbee?  How many times have you ever had a Frisbee wash up at your feet, let alone when you’re looking for one?”

“And how many times have you ever just found a Frisbee on the beach?”

“Then how is it possible that this isn’t your Frisbee?

“I don’t know,” he answered.  “It just doesn’t look like my Frisbee.”  It was obvious that my logic had convinced him to give up his argument.

We watched another dramatic Pacific sunset, and then returned to the house to have dinner and rest for New Year’s Eve.

It wasn’t until the next morning when I was looking at some of my photos on the LCD screen of my camera that I realized I had shots from before the Frisbee was lost.  I quickly found the photos and zoomed in on one where the design on the Frisbee was plainly visible.

There was no doubt.  It was not the same Frisbee.  The photographs plainly show a Frisbee with a very different graphic design.  If not for the photographs, we all would have given up on the notion that one disc had been thrown into the ocean and a different disc returned.  It was just too difficult to believe.  But that’s exactly what happened:  one Frisbee was thrown into the ocean, only to be replaced by a different one a moment later.

I have no explanation.  Something very strange happened.  I don’t know how or why.  Maybe it was nature’s way of assuring us that miracles can and do happen.  If something with odds this impossible can take place, it can happen again.  And maybe next time, the miracle will be something that will change someone’s life for the better.  Maybe next time we’ll believe the impossible really can happen.  It’s already happened once.  It can happen again. 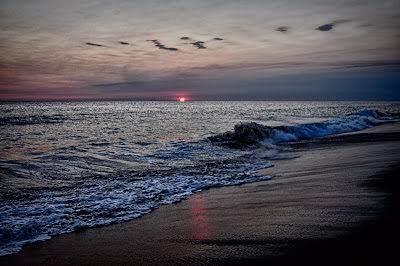 You can view my fine art photography website at:  www.tombellart.com.

This blog has been named one of the top 75 fine art photography blogs on the planet. 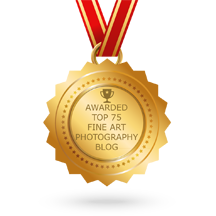