Learning Photoshop and My Dog Have a Lot in Common

Today was a special day for our neurotic-but-charming cairn terrier, Mr. Watson. After six years, he’s finally learned that he can exit his unlocked crate by pushing the door with his prominently handsome snout. We were so excited!

We had such high hopes that he would learn this in his first two or three months of life, like other dogs; but it was not to be. You can’t imagine how we felt.

My friend: “Why doesn’t he come out when you call him? The door’s already a quarter open.”

My ex-friend: “That’s not possible. No dog is that dumb. Queenie could do that when she was just a puppy. I admit he’s no Queenie, but….”

Me: “I don’t think he feels well. I’ll probably have to take him to the vet.”

Anyway, you get the picture. It’s like having a kid who consistently doesn’t swing at the softball until after it’s in the catcher’s mitt. What are the other parents thinking?

Mr. Watson had to learn this lesson in his own time and his own way. We’re just hoping that he can remember this important life skill beyond today. Actually, we’re praying about it. Maybe you could put Mr. Watson on your prayer list, too.

This Right Brain Photoshop Blog is also about learning in one’s own style and way. It’s so easy to see a Photoshop tutorial or attend a session from a bonafide Photoshop guru and have no idea what you’ve actually seen. You get home and you want to give it a try.

“Wait, I know the first step, but what do I do second. My picture isn’t like his. Do I still have to do that? Dang! I know he said something about resolution….”

This Blog is designed to calm your fears (and tell funny stories about my lovable, but brain dead dog). So, you don’t remember how the Photoshop guy did it. It’s really okay. In future blog entries, we’ll be looking at ways to take photographs from a right brain (creative) perspective. And we’ll be looking at ways to work in Photoshop without being hidebound to a set of formulas. If there’s one way to do something in Photoshop, there’s a million. Remember, you can be creative and break some of the rules.

Now, I just have to get my dog to understand rules, so that I can teach him to break them.

Tune in next time for less about Mr. Watson, and more about photography and Photoshop. 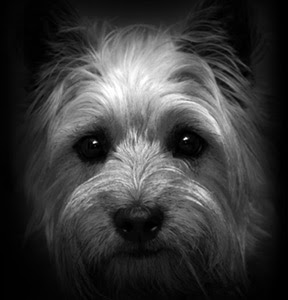 Take a look at my website:  tombellart.com.
Posted by Tom Bell at 2:17 PM No comments: Links to this post