This is an overview of Easter Week in León, Spain.  I will have much more information and photographs in subsequent posts as Holy Week progresses.

Maybe you’re familiar with the famous Holy Week activities of Seville or Malaga, or Antigua, Guatemala.  If so, you know that thousands gather to watch amazing religious processions as hundreds march through the streets, often in medieval habits or costumes carrying gigantic floats that depict the passion of Christ.  Many of the floats (pasos) date from the Baroque era and have been carried in the same procession year-after-year for centuries.  If you’ve seen one of these you’re very lucky.


Lesser known, but just as amazing are the processions of León.  It’s a small city in the north of Spain, maybe best known for its beautiful Gothic cathedral.

León is also known as the best city in Spain for tapas, those generous portions of Spanish ham, or garlic soup, blood sausage, potato omelet, or a thousand other typical foods you get for free every time you order a drink in one of the city’s famous bars.  I’m not exaggerating when I say it’s worth coming to León just to wander the medieval streets of the barrio húmedo (drinking district) and have a cerveza (beer) or vino tinto (red wine) along with one of the many tapas that are given to you with the drink.  However, in the weeks around Easter, you should be aware that Limonada is the drink to have.  Every bar has its own version during the Easter season, but except for the examples that have a slice of lemon or orange, I can’t find any evidence of citrus.  It seems to be a mixture of red wine, in some cases a strong liquor, a bit of sugar, and who knows what else. It's much like sangría, but I think a bit stronger.  The locals warn you, don’t be fooled by its mild nature.  Two or three are plenty. 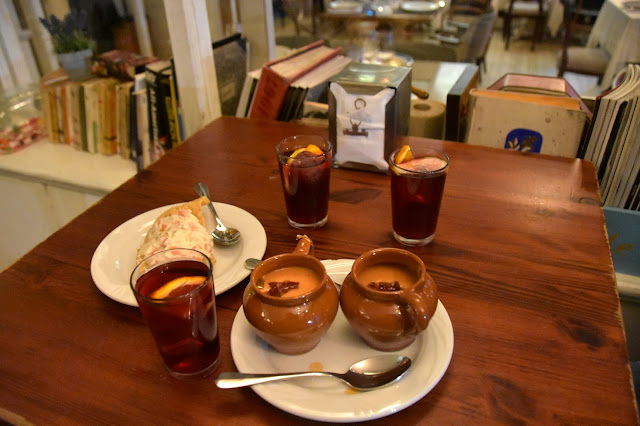 Limonada and tapas.  Three servings of limonada, an order of Russian salad and two pots of salmorejo. Salmorejo is similar to gazpacho, but thicker.  It is topped with bits of fried Spanish ham. The total cost was about US$5.00.


The Processions start on Friday the week before Easter, with as many as seven processions in a single day, everything ending on Easter Sunday.  They are sponsored by Catholic brotherhoods, many of them very ancient.  Young and old participate, and women also now actively take part in the processions. 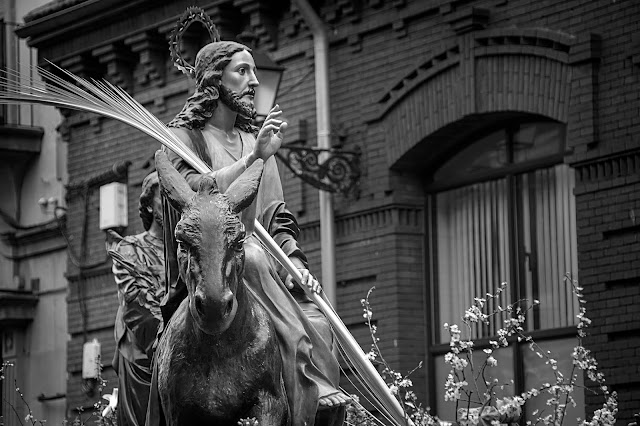 At the time I took this photography, I didn't know its family significance.  My wife's Grandfather, my mother-in-law's father, Gonzalo de Paz purchased this Palm Sunday paso in the 1940s as President (Abad) of the Cofradía del Dulce Nombre de Jesús Nazareno (Brotherhood of the Sweet Name of Jesus of Nazareth).


It's amazing at how much pride the people of  León take in their Easter processions.  Store windows compete for the most amazing representation of Holy Week. 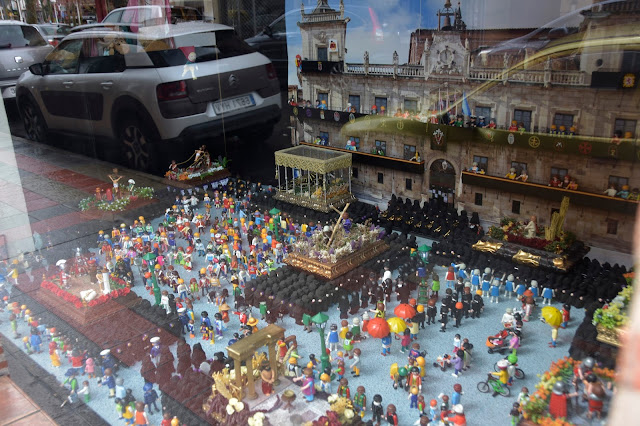 This is one of the most amazing Legos creations I've ever seen. In an embroidery shop window, hundreds of Legos people and objects depict a procession in the Plaza Mayor. 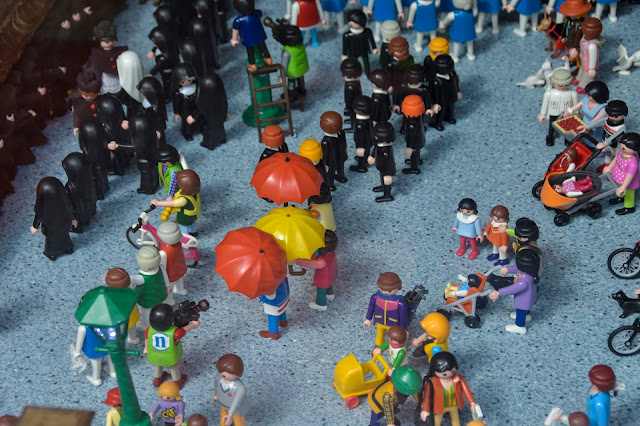 Legos spectators enjoy a procession.  Despite the umbrellas, a procession will be called off  if there is more than a small shower.  The pasos are generally made of wood and are very old.  They are easily damaged by water. 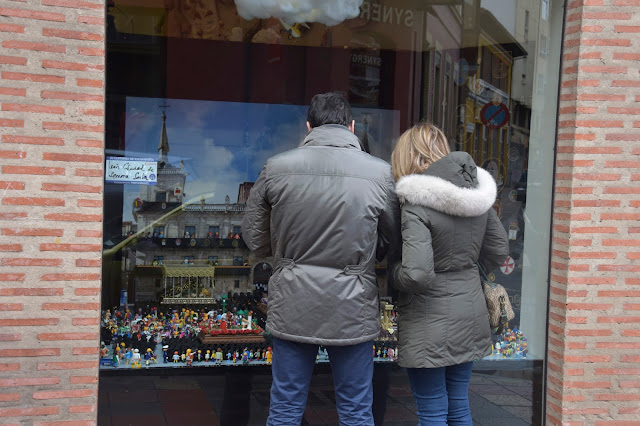 This is my first blog post on Easter week in León.  More will be coming in the days ahead.